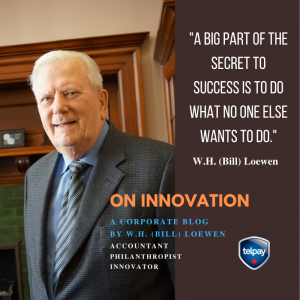 In the early days of the computer era, there were lots of predictions about where these new devices would lead us.  Many are memorable because they were wrong.  Someone wrote a book titled “The End of Work”.   For some of us that don’t seem to have worked.

Comcheq drew predictions from others in the computer services businesses.  There was no way Comcheq was supposed to be able to survive with the banks as its competitor.   We were viewed as the garbage collectors of the computer industry because we provided a service no one else wanted to.  But survive we did and eventually thrived because the banks who provided other types of services disappeared long before Comcheq was sold to CIBC.

A big part of the secret to success is to do what no one else wants to do.  It turned out that even the banks found out that they didn’t want to do payrolls and for a couple of reasons: it interfered with their processing of their banking information and it took too much of their programming resources to maintain their system

A second key factor is to know what you are doing.  Having first-hand experience in the whole cycle of the payroll operation, week by week, year by year, was instrumental.  I wasn’t guessing at what customers needed.  A third component necessary for success is the willingness to learn.  I also learned to listen to the customer when I lost one of our first customers for not doing so.  There were endless variations in customer’s needs that could be satisfied once you had the data needed to do it.

I spent a lot of time listening to customers and to employees that had listened to customers.  I developed a rule that if I heard a request once, I would make a note.  If I heard it twice, I looked for a solution.

END_OF_DOCUMENT_TOKEN_TO_BE_REPLACED 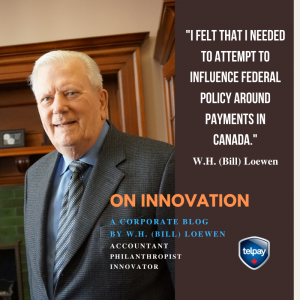 In 1968, I received a brochure proposing that I take on the franchise for a service that provided a group of accounting systems. What I found interesting about the offer was that it included all the usual accounting reports except payroll. That was the very application I was looking for but I never could find an offering that made me want to buy the service.

I could easily imagine reasons why others wouldn’t want to jump into providing that service. The computer programs were complicated. The processing was a bit cumbersome because of the need to produce separate cheque forms for each customer. There were fairly efficient manual systems that were widely used. But still, it seemed like an attractive application for computers because the entry of a small amount of data-enabled production of significant output, the ideal combination for computer applications.

I mulled this question over  for a few days when suddenly an idea struck. What if you produced a system that drew all the payments on the same bank account? A whole list of added benefits would follow. Computer operations would be simplified and significantly speeded up. Cost of forms would be reduced. Separate forms would not have to be stored.  Bank charges would be eliminated if you allied with a bank or trust company for handling the funds and clearing the cheques. Cheques did not have to be individually signed.  Individual bank reconciliations would be eliminated. The interest earned on the float required to be in place until cheques cleared provided unseen revenue to cover some of our added costs. When you added it all up, the combination certainly looked like a winner.

That simple idea was what made Comcheq the success it became. Though I knew the ins-and-outs of payroll production, I had a lot to learn about computer programming. But once learned, it became a huge benefit. Not long after I started Comcheq, the banks became my competitors. That was scary but I knew more about payroll than they did. In fact, I knew very little about computers but a fair bit about payroll and payment systems.  It was easier for me to learn computer skills than for bankers to learn the intricacies of payroll.  In 1968, Comcheq processed its first live payroll that integrated the payroll and payment functions.

END_OF_DOCUMENT_TOKEN_TO_BE_REPLACED 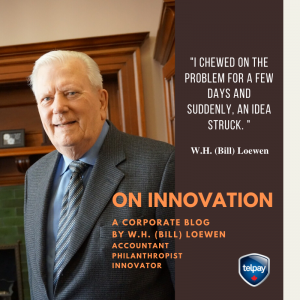 We are regularly reminded of the importance of innovation. Governments often spend large sums encouraging innovation and on so-called centres of innovation. In some cases, it is necessary to add fuel, but that may not be the source of true innovation. It is more a case of solving a known problem than inventing something that did not previously exist.

Probably the most important innovation ever has turned out to be the telephone. It’s invention by Alexander Graham Bell was the direct result of the fact that both his mother and wife were deaf.  He was interested in discovering how the ear worked.  Once he could see that, he determined that he was able to translate that process into building a replica. And that became the telephone.

END_OF_DOCUMENT_TOKEN_TO_BE_REPLACED

Posted in: On Innovation, Telpay News