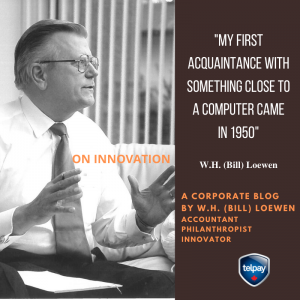 Computers and Me
My first acquaintance with something close to a computer came in 1950. I was assigned to work on the audit of TransCanada Airlines (now Air Canada). Their new accounting office was at the airport in Winnipeg. They had a large installation of what was a coded unit record equipment to aid in accounting for airline tickets, payrolls and general expenditures. The equipment consisted of punch card sorted, card readers and printers. Of course elsewhere there were keypunch machines and operators who keyed the information onto cards. Holes punched in the cards created a coded record that could be dated back to the beginning of the twentieth century.
The equipment was programmed in the sense that a plug board could be wired so that the functions of the readers could produce different reports from the same punched cards. Also, different information could be obtained by sorting the cards first. For example sorting hours worked by employee numbers and merging that information with the employee’s rate card could cause a printer with multiplication capability to calculate the employee’s wages. By a series of steps a payroll could be calculated. More and more elaborate procedure, plug boards and calculating units could come close to emulating what we eventually came to know as the programmable computer. At the time there were few such machines and IBM took the position that they had few practical applications in the business environment. By the end of the decade, they had changed their minds and were to become the dominant player in the computer field.
Around 1960, I took an evening course at the University of Alberta on programming a computer. The computer used was an LGP30. It had its origin in the late forties or early fifties. It used a magnetized drum for storage of programs and data. Input was in the form of ticker tale, the kind used in the telex machines. Output was also ticker tape and a telex type of printer. As the drum rotated instructions were read and executed sequentially.
For programming the machine you could use a computer that was called SPS (Simplified Programming System). Simple it was not, but it was better than, but still close to, machine language. Machine language is a series of ones and zeroes. The compiler took our decimal instructions and turned them into one and zeroes that the machine could understand. The same process is used today though the compilers are much more elaborate and more efficient. It was a good place to begin though because it forced you to understand exactly what the computer had to do. Operations of computer have not changed from that fundamental approach.
About this time I read a book titled “Stonehenge Decoded”. We had been told that the first computer was designed by Charles Babbage. But this analysis of practical uses that Stonehenge could serve made me think of it as a kind of celestial computer. Here was a thirty-five hundred-year-old “machine” that could predict not just equinox but eclipses of the sun, earth and moon and other events. Unfortunately it had no operating manual so the names using it were forgotten. It is an early example of a system that was so complex that no one was able to figure it out what it did. We now have many “legacy” computer systems that are in the same state of limbo.
In Stonehenge’s case it became an object of worship for 3500 years until someone with the aid of a computer, came along and figured it out. Readers may recall the news panic situation as we approached the year 2000 when it was found out many computer systems would crash. The systems departments weren’t able to analyze their programs with sufficient certainty to be able to tell what might happen. Nothing much did happen so their computer programs continue to run and many continue to have programmers praying the will not crash.
To have a long life, systems have to be simple. That in fact is the purpose of “system”. Instead, IBM particularly has been guilty of developing a mystique around what is really a very simple machine. The education system has added to the problem, by teaching complex approaches where simple solutions are easily available. You can bet that the frequent stories of factual computer systems stem from this idea that is windows computers it must be complex.
Posted in: On Innovation